When Max Melrose, a then 17-year-old from Indianapolis, decided he wanted to create an event to help the Caroline Symmes Children’s Cancer Endowment, he didn’t have to look much further than his personal passion: basketball. A lifelong fan of the sport as well as playing as a guard on his varsity team at Brebeuf Jesuit, Melrose became inspired to plan something charitable by events like Coaches Against Cancer. When asked by his Brebeuf coach, Todd Howard, if he would be interested in organizing a similar event, Melrose knew exactly what charity to benefit. Max grew up as a close friend with Caroline both before her diagnosis and during her subsequent treatment. When asked to reminisce on his time with Caroline, Melrose had only warm memories to share.

“I’m only two years older than her and we did so much together. We took her to her first movie, and out trick or treating for her first Halloween. We’d also hang out in our hot tub or just play outside. She was so special to all of us.”

When Melrose began to conceptualize a fundraising event, he based his idea around the Brebeuf team’s previous game with their biggest rivals Cathedral High School. During the matchup, one of Cathedral’s players (and good friend of Melrose) had organized a “purple out” to benefit epilepsy. With this event in mind, Max decided to create a “pink out,” during their next rivalry meeting with Cathedral, with the goal of having every fan and player wearing pink to raise money and create awareness about the illness. He worked with both the Caroline Symmes Children’s Cancer Endowment and Tatum’s Bags of Fun for guidance. After purchasing 300 pink t-shirts with the endowment’s logo, Melrose set about spreading the word – although the process was not without its obstacles.

“One of the biggest challenges is that Brebeuf doesn’t allow you to take donations for clubs at school, so I had to do everything on my own time off school grounds. I started by promoting it through my Instagram, but I got a lot of help from my friends and teammates. Not only did they put out alerts and notices on their social media, but they also did so through word of mouth. I can’t thank them enough.”

Though the sales started strong, Melrose had some concerns as the game date grew closer.

“At first, I sold maybe a hundred, almost right away. But then for a few days nobody asked me or seemed to need them. It was practically just my family and teammates’ families buying them, but no fans or students. I was definitely worried, but then a few days before the game everyone was wanting them. It’s great to be able to count on our classmates and fans.”

In 2019, the evening of the Cathedral game, donning pink and feeling butterflies, Melrose said the game was an emotionally overwhelming experience, with the entire crowd wearing the same outfits. As he jogged onto the court for the pregame warmups, Melrose said he felt floored by the huge showing of support. Even Cathedral fans sitting on the opposite side of the arena had begun buying the shirts.

“That’s when it all really hit me. It felt like Caroline was there with me.”

Overall the event raised nearly $3000, all of which went to the benefit the Endowment. Perhaps just as importantly, the pink out also sparked conversations among Melrose’s friends and classmates, who asked how they could get involved with the organization’s efforts.

“This endowment is really important because people – especially children – shouldn’t lose their lives due to something that public just doesn’t know about. No one should have to lose their best friend like I had to. Deaths from pediatric cancer is something that’s happening almost entirely over a lack of funding. It’s just nonsense that there’s so much money going into things that are publicized more. I think that if we get the word out, especially to the younger generation such as mine, that when we grow older there will be a cure.” 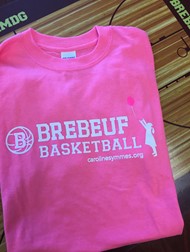 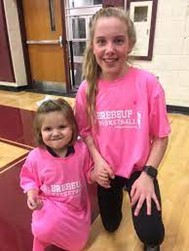 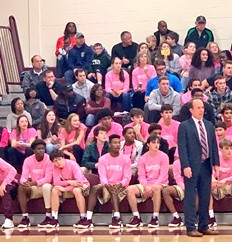